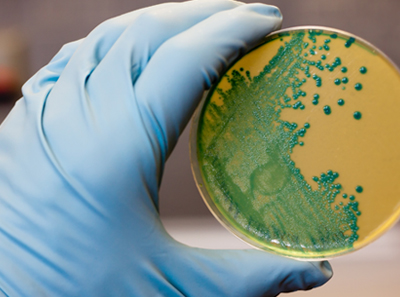 Listeriosis caused by Listeria monocytogenes is a serious etiological danger. A significant increase in infections has been observed in recent decades, mainly due to the consumption of contaminated food. In addition, the fact that around 30 per cent of infections are fatal is alarming. The Listeria monocytogenes are particularly dangerous for pregnant women, the elderly and immunocompromised people.

Listeria monocytognes is a relatively anaerobic, motile, Gram-positive bacilli. It is an intracellular parasite. It does not form spores and does not have capsules. It develops at pH between 4.4 and 4.9 and temperatures between -0.4 and 50°C under aerobic or relatively anaerobic conditions. It is commonly found in the environment. It is most often found in soil, water, sewage and the digestive tract of many animals species and humans. It is often isolated from farm animals, hence the risk of contamination by bacilli of products from raw materials obtained from animals. It is estimated that more than 90 percent of infections are caused by the consumption of infected food. The genus Listeria exhibits very high resistance to unfavourable environmental conditions such as high temperature, salinity and low pH. For this reason it is widespread in the environment and poses a threat to the food industry. It can also survive short-term pasteurisation and freezing. It proliferates at temperatures between 2 and 4°C and thus food stored at these temperatures may be exposed to its infection. An additional problem in terms of food safety is that the genus listeria is able to develop resistance to adverse environmental conditions. The products most at risk of Listeria infestation are those that are least processed, e.g. vegetables, especially leafy vegetables such as lettuce and spinach, as well as milk and other dairy products, meat, cold cuts and fish. A particularly important and increasingly widespread problem is the presence of pathogenic bacilli in soft cheeses and ready-to-eat delicatessen food products. An important aspect of preserving food safety is to maintain adequate hygiene during the process of production, proper storage of products and their transport.

Symptoms of food poisoning appear within a few to several hours after consumption of the infected product. Listeriosis may be characterised by various symptoms. The most common symptoms in the first stage of the illness are headache, fever, cough, digestive complaints and joint pains. In the advanced stage it may result in inflammation of the meninges, brain, lungs, endocardium, joints, bones or peritoneum. The most severe cases result in septicaemia, acute respiratory failure and even death.

The people most at risk of contracting listeriosis and its severe course are seniors, children, people with cancer and weakened immunity. It is particularly dangerous for pregnant women and foetuses because it can lead to miscarriages, premature births and even death of the child after the birth. A child, who becomes infected with listeriosis during childbirth or while in the mother’s womb, is exposed to serious problems related to the nervous system and other organs such as the liver and lungs. Furthermore, listeriosis in newborns has a very high mortality rate.

Detection of Listeria monocytogenes in food

The testing of food for Listeria monocytogenes is regulated by the EN ISO 11290 standard according to which a food sample is cultured in selective multiplication broth and then transferred onto selective media. The distinctive colonies that have grown are subjected to confirmatory tests. Identification tests using biochemical reactions, e.g. involving carbohydrates, may be used for this purpose. The colonies analysed are placed in a diluent.  After incubation, the results are analysed on the basis of the change in colour. The test also checks the ability of the bacteria to hemolysis and hydrolysis of esculin. Immunoassays are also commonly used to identify Listeria monocytogenes. Thanks to modern microbiological testing methods, a negative result can be obtained after only 48 hours. Scientific progress makes it possible to detect pathogens that pose a threat to human life and health rapidly and precisely. Companies involved in the production of ready-to-eat foods are required to continuously monitor microbiological purity towards Listeria, both in the products manufactured and in the production areas as well as within the equipment used.

According to Commission Regulation (EC) No 2073/2005 of 15 November 2005 on microbiological criteria for foodstuffs, Listeria monocytogenes absolutely must not be present in 25 grams of food intended for the consumption of infants or food for special medical purposes. However, in ready-to-eat foods in which growth is not possible and which are not intended for infants or are not intended for medical purposes, Listeria monocytogenes may be present at a level of not more than 100 cfu per gram if the product was placed on the market within the shelf-life period.